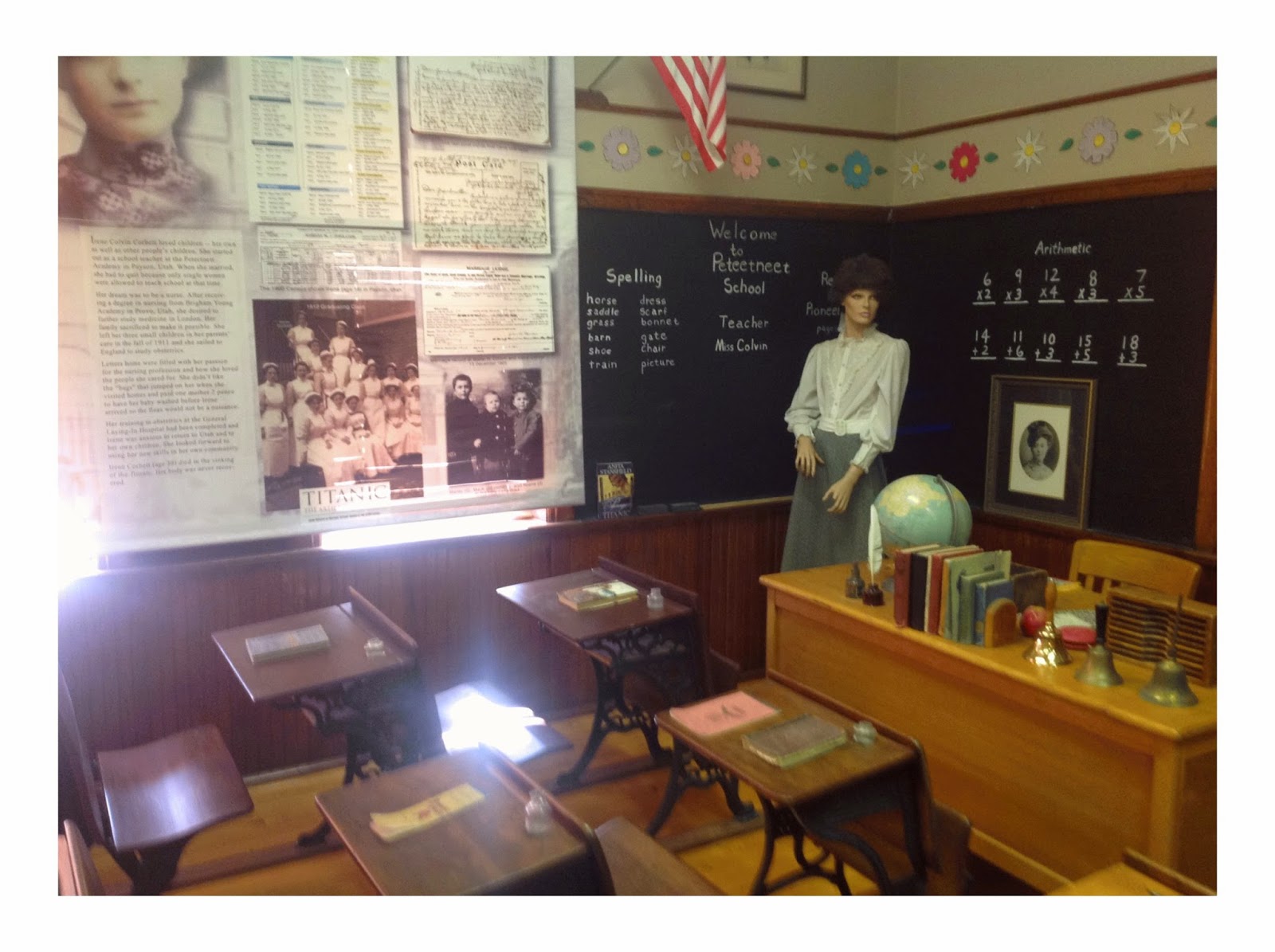 
Education has always been an important part of Payson since its founding in the fall of 1850.  One of the first schools was located in northwest Payson.  Later, each quadrant of the city had a small school.  The southeast part of town had the Done School; the northeast part of town had the Curtis School; the northwest part of the city had the Rock School and the southeast area had the Taylor School.  The first three of these are still standing and now serve as homes for some of our residents, The Payson City deeded the old city gravel pit to the Payson School District  for the purpose of building a new school for the new community.  The Peteetneet School was constructed  in 1901 and classes moved in the January 1902.
The School Room Exhibit shows how a school room would have looked when the building opened.  The picture of George Washington once hung in every classroom in the building.   The picture demonstrates Pride and Patriotism.
Boys wore dresses until they were about two years old, then knickers until they were about twelve.  At that time they began wearing their long pant which was the first sign of manhood.  Girls wore black boots and socks with frilly dresses.  Some wore the same dress all week with a different pinafore over it each day.
The school room exhibits three different types of desks used in the building over the years.
The Board of Trustees wondered which one of the many teachers who taught in the building from 1902 until 1988.  They come to choose Miss Irene Colvin.  She was the daughter o Levi Alexander Colvin and Mary Alice Curtis.  She was born and raised in Payson.  She only taught for two years before her contract was voided for getting married.  The following list gives the rules of the Female Teacher Contract:

Miss Colvin’s contract was voided when she married Walter H. Corbett of Provo.  She had three children and then decided to go to London to take a six-month course to study obstetrics.  When she graduated, she was anxious to return home.  She booked passage on the H.M.S. Titanic. On April 15, 1912, the ship hit an iceburg.  Some of the women and children of the first class passage were saved. Irene had booked first class passage but had gone to the second class section to visit a friend from school.  All passengers in this section at the time were locked below.  She was one of fourteen women who perished in the section.  She was the only passenger on the ship from Utah.
Several years ago, there was a display of artifacts from the Titanic on display in Salt Lake City.  There was a large wall-hanging honoring Irene Colvin Corbett as the only Utah Passenger.  This wall-hanging was left in Salt Lake City at the LDS Family History Center.  When the Family History found out about her connection to Payson and the Peteetneet, they donated it to the Peteetneet.  It is on display in a prominent location in the School Room Exhibit.
Take a few minutes and visit this outstanding exhibit and all the others located in our museum.  It will be a worthwhile visit for you and your family.
Posted by Dee at 4:02 PM