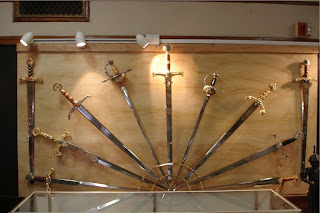 TOLEDO SWORD DISPLAY
The Payson Historical Society is proud to announce a new display that can be seen at the Peteeneet Museum during April, May and June.  Dale Barnett, the current President of People Preserving Peteetneet,  has graciously consented to display his collection of swords and various pieces of ceramics that he and his wife, Gloria collected during their many travels throughout the world as part of his business. 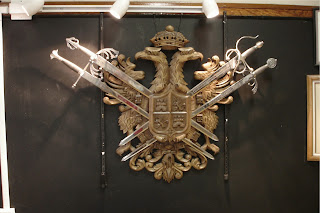 Dale founded Payson Sheet Metal many years ago.  His company is widely recognized for their work with the L. D. S. Church and their temples.  His company does the TABB (Testing, Adjusting, and Balance) program in all the temples throughout the world.  On his many travels to Spain, he  acquired a large collection of Toledo swords.
Toledo is famous for its historical character, art and its steel.  It is difficult to know the exact date when swords and knives began being made in the city.  It is beyond doubt that this industry is as old as the town itself. 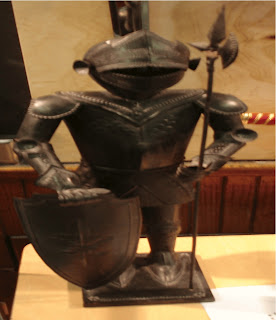 During the 15th, 16th and 17th Centuries craftsmen from throughout Europe came to Toledo to learn from the artisans the secret of making the  blades the city was known for.
The fame of the Toledo steels was rooted in the mastery with which some artificers handled tempering without any technical knowledge of measuring, by far, the adequate temperatures for such treatment.  The temperatures were known by the color of the red-hot steel and the immersion into water.  People related the quality of the tempering to the water of the Tagus River in which the swords were tempered.
Dale has a collection of many swords including examples of swords used by  El Sid, Richard the Lionheart, Sir Lancelot, Ivanhoe, Robin Hood, Don Quixote, Alexander the Great, Columbus, Prince Valiant, and Charlemagne among others.  There is also on display a small suit of armor and a warrior mounted on his horse. 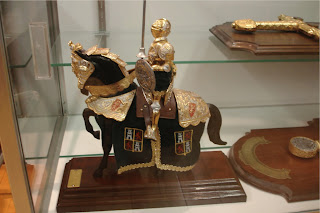 This display is one of the finest that we have had the opportunity to display as part of the Payson Historical Society exhibits.
Posted by Dee at 7:28 PM 2 comments: