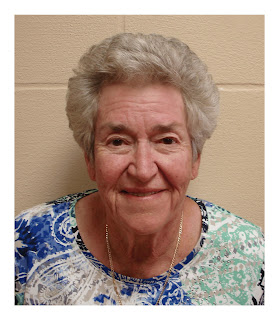 Beth Braithwaite Nielsen
Posted by Dee at 11:03 AM No comments: 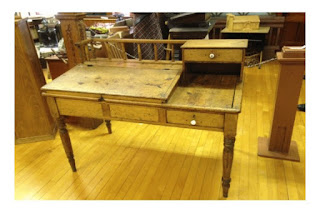 Lynn and Jill Carter of Carter Antiques, a local antique store, donated an original Peteetneet School Teacher's desk to the Peteetneet Museum.  They felt that it should be in the museum where it served teachers of the school for many years.  Mr. Carter stated that he had purchased the desk over thirty years ago from Mac Whitlelock. who operated Main Street Antiques.  Mr. Whitelock's store was located where we find the Payson Public Library today.  Mr Whitelock had obtained the desk a number of years earlier from a local individual who had ownership of the desk.
This piece of history is an added asset to our museum as it represents a piece of Peteetneet history as well as Payson history.  The museum would like to thank the Carters for their generosity in donating this valuable antique desk to the Peteetneet Museum.
Posted by Dee at 8:13 AM No comments: 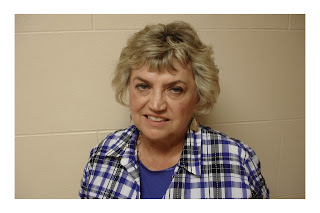 The Peteetneet Museum is staffed by volunteers who oversee the operation of the museum.  The volunteer tour guides are some of the most important volunteers at Peteetneet.  They are the daily face of the museum.  These volunteers donate at least three hours a week, some do even more, sharing their time and talents with the visitors to the museum.  The museum could not operate without these wonderful people.  One of our outstanding volunteers is Colleen Huff Wilson.
Colleen has actually been a volunteer for many years.  She has assisted her husband, Charlie Ray Wilson on the grounds each year.  She has been there to help weed and plant the flowers each summer.  Her “green thumb” has been evident when you view our beautiful flower beds and gardens.
Colleen was born and raised in Payson.  She is the daughter of Lewis and Lois Huff.  Lewis was involved in music circles in Payson for many years. He directed the Payson City Band and oversaw the Sunday evening band concerts each summer.
After graduation from Payson High School, she attended Snow College and LDS Business College.  She later married Charlie Ray Wilson in the Salt Lake Temple.  They made their first home in Walla Walla, Washington while Ray served in the Air Force.  After moving nine times and living in five different cities, they returned to Payson to make their home and raise their family.
Colleen worked as a secretary in the health industry for most of her married life.  She retired last December after 25 years at Canyon View Medical Group.  After having back surgery in January, she decided she would like to become a Tour Guide volunteer at the museum.  However, she still assists her husband helping maintain the grounds of the museum.
She became involved in the preservation of Peteetneet.  She first served as a secretary to Gordon Taylor who helped spearhead the saving of this beautiful old Payson landmark.  She stated she had nothing to do with the actual preservation of the building.  She said she is totally amazed at the work and effort that have made the Peteetneet the wonderful facility it is today.
She feels that each room of the museum is phenomenal and so much of Payson’s history is on exhibit.  Colleen has deep roots in Payson and the Peteetneet.  Her grandmother, mother, and her children were all educated within the walls of this wonderful old school.  Her father organized the Peteetneet Band in the 1960s.
Most of Colleen’s hobbies involve music.  She is a member of the Payson Civic Chorale and she has played the flute and piccolo in the Payson City Band for many years.  She also loves her Indian flutes (wooden flutes) and has a collection of about five of them.  He latest one has a double barrel and sounds really neat she states.  She also helps sponsor the Huff Music Contest at Payson High School.  Her father began sponsoring the contest more than 40 years ago.
Since retiring, she has taken up knitting.  She has also been teaching one of her grandsons how to play the flute.  She even found time to teach four of her grandchildren in 4-H this summer.  She and Ray have two children, April Jones and Rhett Wilson.  They also have eight grandchildren, four boys and four girls.
The Peteetneet Museum feels very fortunate to have Colleen join our other great volunteers at the museum.  She is here every Wednesday afternoon.  Stop by and have her give you tour.
Posted by Dee at 4:27 PM No comments: